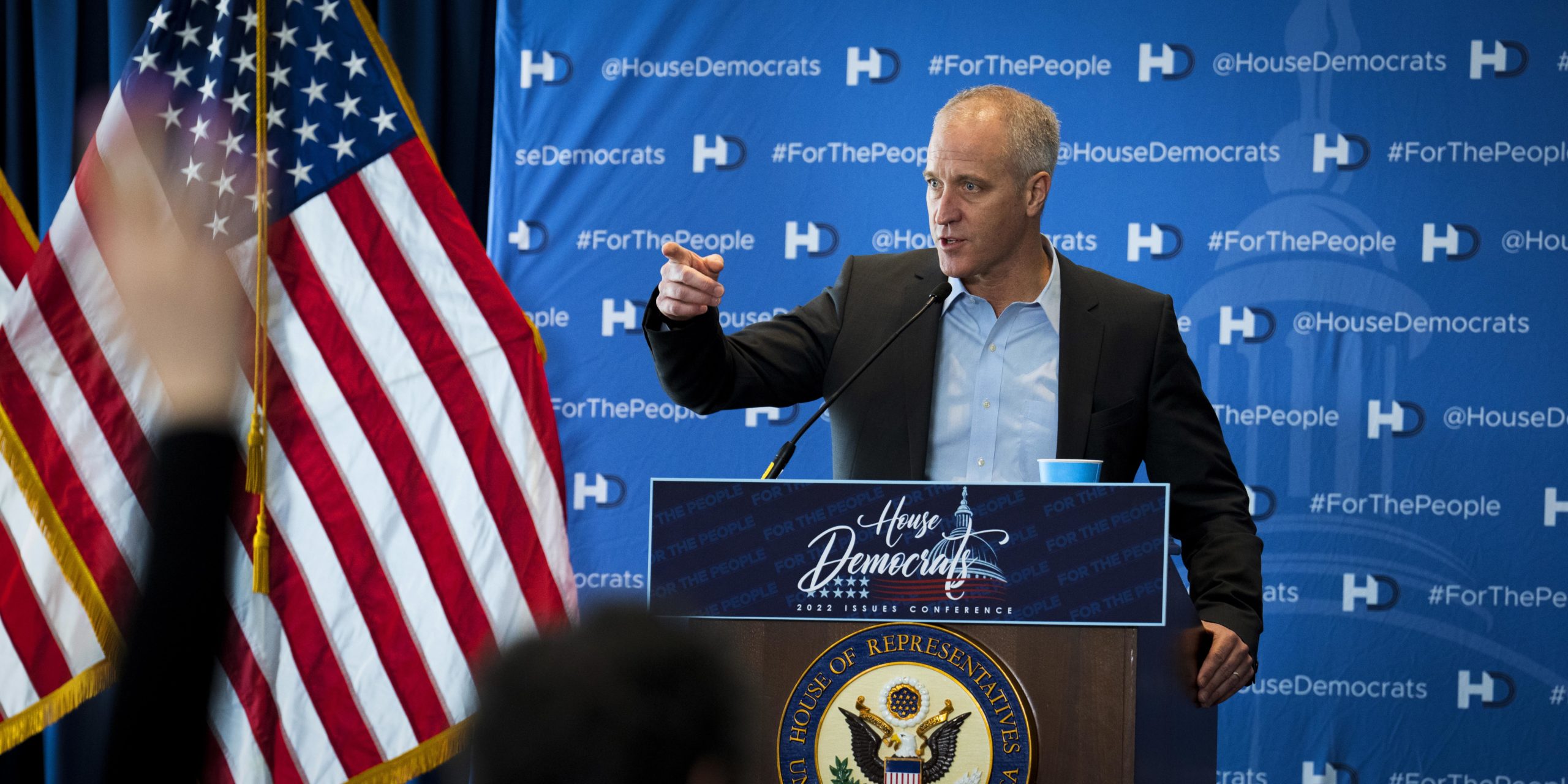 “Alessandra Biaggi voted to release criminals without bail,” read an ad on the back of a truck with a New Jersey license plate driving through New York’s 17th Congressional District, which covers the counties of Westchester and Rockland. The ad is one of several — including digital, text, and mail ads — attacking state Sen. Alessandra Biaggi as “a radical anti-police extremist,” paid for by the Police Benevolent Association of the City of New York.

Biaggi is challenging Rep. Sean Patrick Maloney, the Democratic Congressional Campaign Committee chair, in the upcoming August 23 Democratic primary. The police union’s PAC dropped more than $410,000 in the last two weeks on ads against Biaggi, its first federal expenditure since it funded ads against former New York City Mayor Bill de Blasio in 2019 during his short-lived bid for the Democratic presidential nomination.

“Biaggi is a privileged New York City radical who has spent months trying to trick voters from Long Island to the Hudson Valley into giving her a ticket to Washington,” NYC PBA President Patrick Lynch said in a statement to The Intercept. “She doesn’t care about these communities. She just wants a national platform from which to spread her extreme ideology. She has a history of demonizing cops and supporting policies that have made our neighborhoods less safe. Voters in the 17th Congressional District deserve to know who she really is.”

The PBA PAC is one of three that have come to Maloney’s aid in the final weeks of the race despite his advantage in fundraising, institutional support, and recent polling. The three political action committees, including a new group called Our Hudson PAC and the National Association of Realtors PAC, have spent just over $585,000 so far on ads attacking Biaggi or backing Maloney. The National Association of Realtors PAC spent $45,000 on ads backing Maloney last week. Our Hudson PAC dropped $130,000 on ads attacking Biaggi since August 2. Maloney is also endorsed by Team Blue PAC, a committee backed by House Democratic Caucus Chair Hakeem Jeffries, D-N.Y., which has led efforts to protect several incumbent Democrats in safe blue seats facing primary challenges from their left.

On Tuesday, the PAC for the Working Families Party, which is backing Biaggi, spent $100,000 on ads supporting her. Her campaign website includes a section often referred to as a “red box” and used by candidates to package messaging that can be used by PACs and outside spenders to boost the candidate or attack their opponents. Yet Biaggi’s campaign is not taking corporate PAC money, and no other PACs are backing her campaign.

In a statement to The Intercept, Maloney spokesperson Mia Ehrenberg called Biaggi hypocritical and said that the new spending from the Working Families Party PAC amounted to money from a dark-money super PAC. “Senator Biaggi’s hypocrisy knows no bounds. The day after a dark money super pac drops one hundred thousand dollars in negative attack ads, funded by the one group that has endorsed her campaign, she had the gall to bemoan dark money super pacs. Senator Biaggi has been encouraging this outside spending, calling for it on her website and providing footage to the group to use in the ads. This is why Senator Biaggi has not been endorsed by a single Democratic Committee or current elected official from the district, she has no interest in holding this seat for Democrats, she is only interested in her selfish personal ambitions.”

In June, the co-chairs of the Congressional Progressive Caucus sent a letter to Maloney in his capacity as head of the DCCC, along with the heads of the Democratic National Committee and the Democratic Senatorial Campaign Committee, and asked them to condemn super PAC spending in primaries. And last month, a group of progressive organizations in the Hudson Valley sent another letter to Maloney asking him to do the same. Maloney did not respond publicly to either letter. His campaign declined to comment.

A truck with a New Jersey license plate is seen driving through New York’s 17th Congressional District attacking state Sen. Alessandra Biaggi as “a radical anti-police extremist,” paid for by the Police Benevolent Association of the City of New York.

Photo: Obtained by The Intercept

Maloney made the controversial decision in May to run in the 17th District instead of in his current district, the 18th, after newly drawn lines offered a potentially smoother path to victory. Maloney’s current district, which he won by 13 points in 2020, is now rated as a toss-up, and could have posed an embarrassing outcome for the head of the party’s House campaign arm.

Maloney’s decision came as a surprise to some New York Democrats, including the incumbent in the 17th, Rep. Mondaire Jones. Maloney’s move pushed Jones to run in a crowded field of a dozen candidates in the 10th District, which covers parts of Lower Manhattan and Brooklyn, rather than challenge progressive Rep. Jamaal Bowman in the 16th. The shuffling of district lines set off a frenzy as some candidates, like Jones and Biaggi, planned to relocate to new districts, or in the case of Reps. Jerry Nadler and Carolyn Maloney, prepared to battle it out in a member-on-member primary.

The new spending comes at a vulnerable point in Maloney’s campaign, which has faced several scandals in recent months — some stemming from Biaggi’s camp. A former local Democratic county party chair and supporter of Biaggi’s campaign filed the ethics complaint after the New York Post reported that Maloney had employed a “body man” who performed personal duties. Maloney’s campaign told the Post that the allegations of misuse in the complaint were baseless and that the staffer was never directed to do personal work. Ehrenberg, Maloney’s spokesperson, also said that the person who filed the complaint was “a vocal Biaggi supporter who has a longstanding, personal vendetta against” the representative.

Maloney has also had to answer in recent weeks for criticisms of tactics this cycle by national Democratic groups including the DCCC, which have come under fire for boosting extreme conservative candidates, including supporters of former President Donald Trump and election deniers, in Republican primaries hopes of improving Democrats’ chances in what is expected to be a brutal midterm cycle. In a scathing op-ed last week, the New York Times Editorial board called the strategy “profoundly irresponsible.” Maloney has said a DCCC-funded ad highlighting ties between Trump and an extreme conservative candidate in Michigan was to attack, not help, the candidate.

Ads from the National Association of Realtors PAC backing Maloney applaud him as “a longtime supporter of issues important to the real estate industry” and say he “has proven to be a REALTOR champion. Join us in supporting him in the Congressional Primary.” An ad from Our Hudson PAC attacking Biaggi reads “This is no time for Alessandra Biaggi’s divisive politics” and features two Biaggi tweets that said “Defund the police,” and “The police in this country are soulless.”

Biaggi launched her congressional campaign in February in the district of conservative Rep. Tom Suozzi, D-N.Y., in Long Island. At the time, Suozzi was running in the Democratic gubernatorial primary against Gov. Kathy Hochul. But after Maloney announced his plans to run in the 17th, Biaggi publicly criticized him for pushing Jones out, and less than a week later, announced that she planned to run against the DCCC chair instead. Since then, she’s hammered his record on the Affordable Care Act and tried to make the argument that the party doesn’t have room for a leader who chose to push a popular first-term lawmaker out of his district in order to save his own seat. Maloney’s campaign has the advantage in fundraising and institutional support, with more than $3.5 million dollars to Biaggi’s $700,000, and support from House Speaker Nancy Pelosi, and endorsements from former Rep. Nita Lowey, D-N.Y.; the New York AFL-CIO; and End Citizens United. Both candidates have endorsements from Moms Demand Action.

Biaggi’s rise to the state legislature has been compared to Rep. Alexandria Ocasio-Cortez’s historic toppling of former Rep. Joe Crowley, D-N.Y., in 2018, and she has styled her campaign in a similar way. Biaggi described Maloney as “a selfish corporate Democrat” to the New York Times and attacked him in a July forum held by the Yorktown Democratic Committee during which she claimed that he “not only voted with Republicans on but voted repeatedly to water down” the Affordable Care Act. On Tuesday, her campaign released an ad showing an interview during Maloney’s first congressional campaign with the editorial board of the Poughkeepsie Journal in which Maloney declined to say whether he would have voted for the ACA.

The race in the 17th now pits Maloney, the face of House Democratic efforts to stave off major losses in November and hang onto a thinning margin in the chamber, against Biaggi, backed by progressives including Ocasio-Cortez, Cynthia Nixon, Empire State Indivisible, and Sunrise NYC. Biaggi was elected in 2018 after she ousted the former leader of New York’s Independent Democratic Conference in a primary. Members of the IDC had long caucused with Republicans, and the scheme gave the GOP a constructive majority in the state, but the group disbanded in 2018 after several incumbents lost to progressive challengers. Once in office, those progressive lawmakers passed legislation to strengthen rights for voters and tighten campaign finance laws, measures that had stalled as Democrats ceded control to the IDC.

The post Cops Spend $400,000 to Save House Democrats’ Campaign Chair appeared first on The Intercept.

Previous post These pole-mounted EV chargers let down their joules