Hundreds of protesters marched toward the Supreme Court in Washington on Thursday morning to send a message to President Joe Biden: He is not doing enough.

Demonstrators minced no words when it came to the five justices who had voted to overturn Roe v. Wade and issued sharp criticisms of a Republican Party that spent years securing a majority on the court extreme enough to reverse 50 years of precedent. Yet the anger that got many of the activists out on the street was aimed at the Democratic Party that many of the marchers hold partially responsible.

“The Democrats act as if the worst will never happen. And the worst keeps happening.”

“The Democrats act as if the worst will never happen. And the worst keeps happening,” said Ana María Archila, a former candidate for lieutenant governor of New York, in an interview with The Intercept before the march. “They” — Republicans — “are rolling back decades of progress. They are taking away the most basic rights from people. Democrats have to have the courage to match the moment.”

Within a few hours, nearly 200 abortion activists had been arrested and forcibly removed from the crossing at First Street and Constitution Avenue in Washington, D.C. — a busy intersection near the court’s sprawling front steps. While sit-ins are a relatively common occurrence in Washington, organizers hope the size of the demonstration, and the broad coalition of organizations that supported the protest, inaugurates a renewed push for nonviolent civil disobedience in the wake of the Supreme Court’s gutting of abortion rights last week.

The demonstration, which was spearheaded by Center for Popular Democracy, saw a range of organizers, Democratic candidates, elected officials, and movement leaders from across the country assemble at the Lutheran Church of the Reformation on Capitol Street. The expected culmination of the day’s events — arrest at the hands of U.S. Capitol Police — was clear from the start.

The tactics represent a departure from what has defined many left-wing activist groups for most of Biden’s tenure. Despite the president’s sagging approval, many progressive leaders and legislators have chosen to stand by his administration — or at least mute their criticisms — in exchange for increased access and a louder voice in the policy-making process. The administration’s failure to prepare a road map for a post-Roe America, however, appears to have soured that relationship.

Reports early Thursday morning that Biden had reversed course and now supports a filibuster carve out for abortion rights did little to convince attendees.

“They’ve had that draft opinion for how long?” said one protester, who asked that his name not be used, referring to a leaked draft from the court made public in May. “And it still took them a week to say they support a filibuster carveout?”

Reverend William Barber II is detained by Capitol Police for blocking an intersection with abortion rights demonstrators in Washington, D.C., on June 30, 2022.

A number of Democratic candidates who attended the event and faced arrest by Capitol Police shared that sentiment, including Melanie D’Arrigo, a candidate for Congress in New York’s 3rd Congressional District. A spokesperson for the D’Arrigo campaign, David Guirgis, told The Intercept that D’Arrigo’s arrest serves as proof that she was unafraid to push the party to take a firm stand on abortion rights. “We are here because Republicans have attacked Roe for 50 years and Democrats have done nothing,” he said. “[Melanie] is not afraid to stand up to Republicans or Democrats to ensure that basic human rights are protected.”

“We are here because Republicans have attacked Roe for 50 years and Democrats have done nothing.”

D’Arrigo was discharged from police custody within a few hours of being detained. Upon release, she issued a statement with a similarly defiant tone. “I was let go after a couple of hours—but for millions of people in states where abortion, a critical healthcare procedure, is now criminalized, their arrests will be far longer and far more severe,” she said. “What the Supreme Court did with their radical, partisan decision in Dobbs v. Jackson … underscores the need to elect better Democrats, not the status quo that got us here.”

One of the last activists to face arrest, legendary movement leader Rev. William J. Barber II of the Poor People’s Campaign put the message activists are hoping to send to elected Democrats in even starker terms. Arrested while addressing the crowd, Barber was being escorted away from the intersection by Capitol Police when he declared: “We will primary everybody.”

The post Democrats Don’t Have a Plan, but Abortion Rights Activists Do: “We Will Primary Everybody” appeared first on The Intercept. 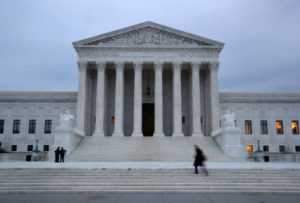