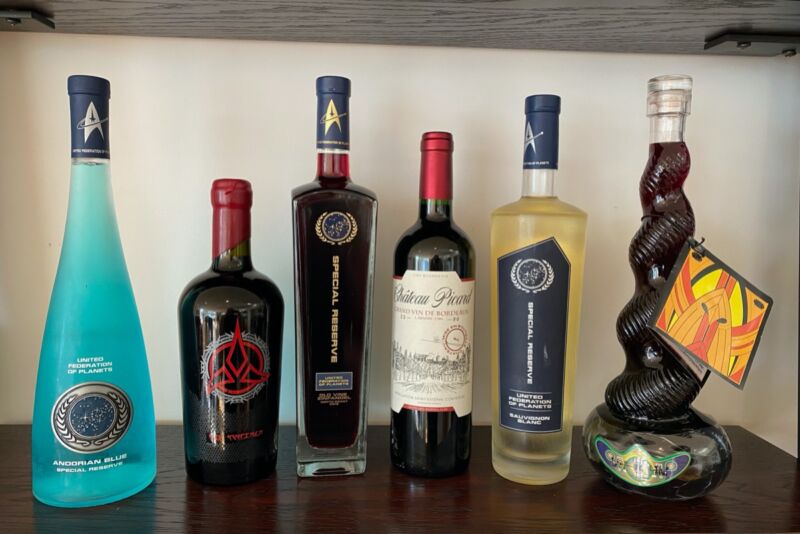 Back in 2019, (partly)  in honor of the announcement of Star Trek: Picard, Ars staffers held an informal tasting session to sample two bottles of official Star Trek Wines, a collaboration between CBS Consumer Products and Wines That Rock. And the wines were…. far better than we expected, although very much over-priced.

Picard has now wrapped its second season, with a third currently in production, and the folks behind Star Trek Wines have expanded their collection from two varieties to six. So a second informal wine tasting was clearly in order. And who better to help us in this noble endeavor than Q himself—aka actor John de Lancie—and The Orville writer Andre Bormanis, who launched his career as a science advisor on TNG? They joined a fresh group of tasters (eight people in all) on a cool late spring evening in Los Angeles, where the nibbles were plentiful and the conversation flowed freely. (Wine assessments were anonymous, in keeping with the gathering’s super-casual vibe. And the wine was purchased out of pocket, not gifted for promotional purposes.)

Let’s start by revisiting the original two varieties. First up: a 2017 Sonoma Valley zinfandel, described as a blend of 87 percent zinfandel, blended with petite sirah and just a hint of syrah.. The packaging plays up the fictional connection, claiming the wine is produced under the United Federation Special Reserve Label, “blended by our intergalactic sommelier and designed to fit the palates of multiple planets.” (The back label tasting notes adds “Andalorian spice” to the description just for fun.)

Previous post The best Memorial Day sales we can find on gadgets, games, and tech gear