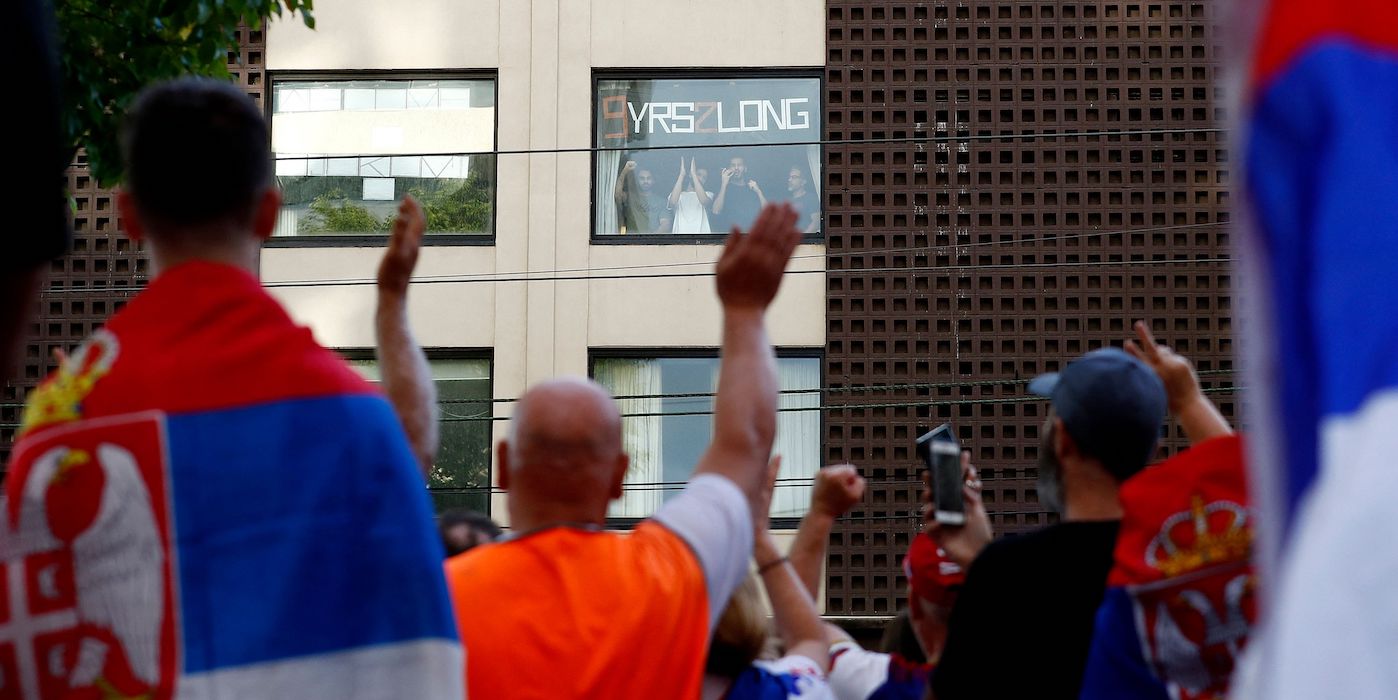 The global media frenzy over Australia’s temporary detention of anti-vaccine tennis star Novak Djokovic has inadvertently drawn attention to the cruel mistreatment of refugees imprisoned in the same run-down, bug-infested facility in Melbourne.

News reports showing Djokovic’s fans, and local anti-vaxxers, rallying in his support outside the Park Hotel, a makeshift detention center, have included images of protesters decrying the suffering of the dozens of refugees who are also there. Some of those people have been in Australian detention facilities for close to nine years, just for arriving in the country by boat, seeking asylum.

The detained asylum-seekers, who can see the protesters and journalists outside and have commented on the attention on social media, were among several thousand who were subjected to harsh conditions in offshore processing centers, as part of the Australian government’s attempt to dissuade refugees from coming by sea.

@DjokerNole is detained in the same building as me and I’ve never seen more news crews outside. pic.twitter.com/uTrCTiL9yz

According to a Guardian database, of 3,127 people who sought sanctuary in Australia between July 2013 and December 2014 and were then sent offshore, almost half were still in detention at the end of 2020.

“Australia’s abusive offshore processing policy has caused immeasurable suffering for thousands of vulnerable asylum seekers,” Sophie McNeill, Australia researcher at Human Rights Watch, said last year. “The Australian government should accept New Zealand’’s repeated offers to take some of the refugees, and work toward ending offshore processing once and for all,” she added.

Journalists have documented moments of solidarity but also some tensions between supporters of the refugees and those of the Serbian tennis star, whose exemption from the Covid vaccination requirement to enter Australia, granted by local authorities, was rejected by the federal government. Djokovic is fighting the deportation order.

We’ve got Djokovic supporters on the left and refugee advocates on the right.
One Djokovic supporter just said to me “I feel so ignorant. I came here for him, and find out they’ve been locked up nine years. It’s so wrong.” pic.twitter.com/elBDkJAZEl

Ben Rothenberg, who covers tennis for the New York Times, tweeted video of a woman wrapped in a Serbian flag criticizing a pro-refugee protester “for wearing a mask during the pandemic.”

By arriving in Melbourne to defend his Australian Open title despite refusing to get vaccinated against Covid, Djokovic became a hero to anti-vaxxers around the world but angered many Australians, including some of the refugee supporters gathered outside the hotel.

Members of one local group, the Campaign Against Racism & Fascism, which calls itself “pro-vax, pro-union, anti-fascist,” held up banners Friday that read: “Refugees Are Welcome, Djokovic Is Not” and “Djokovic Can Fuck Off, Free Refugees.”

Human rights activists and refugees have welcomed the attention of the media but expressed concern that after Djokovic leaves next week when his appeal is either accepted or rejected, the Australian people will also stop paying attention to the considerably greater suffering of the detained asylum-seekers.

Australia’s appalling treatment of refugees and asylum seekers is now in the international spotlight. But will it put pressure on the government to release people from detention, or will it get lost in the news cycle just like Palestine, Afghanistan and everything else?

The whole world is watching as Novak Djokovic is detained at Park hotel prison. As a refugee I was imprisoned there, & refugees are still imprisoned there in tiny rooms without fresh air. No one deserves this. Let’s not forget the people that will remain long after Novak leaves.

The plight of refugees who have been detained in a hotel for years is finally being known around the world only because #Djokovic is being held here too. Australia’s border policies are cruel. pic.twitter.com/wGTIF4CAOV

#FreeTheRefugees #ParkHotel Novak will be free to continue his super rich lifestyle very soon but some of the refugees have been held hostage in Australia’s cruel and torturous dentention for 9 years. #novakdjokovic #auspol #AustralianOpen #GameOver #Justice4Refugees pic.twitter.com/qcQ3AG3Z31

Shankar Kasynathan of Amnesty International has urged Djokovic to speak out in support of the refugees.

Hey @DjokerNole – if there was a time for you to have an impact on the global refugee crisis, that time is now. The world is watching you in detention. You can change the world right here, right now. Speak up and it’s #GameOver @amnestyOz pic.twitter.com/4Ex6n1RmuO

Behrouz Boochani, a refugee journalist who documented the harsh conditions in Australia’s offshore processing centers before obtaining asylum in New Zealand in 2019, observed on Twitter that the world’s priorities seem to be backward. “Some say that Australia’s reputation has been damaged because of the situation with [Djokovic],” he tweeted, “but in a better world, public anxieties about international image would be stirred by the imprisonment of refugees in the same hotel for almost a decade.”

Two of the refugees at the Park Hotel arrived in Australia as children: Adnan Choopani and his cousin Mehdi. They are members of Iran’s persecuted Ahwazi Arab minority and have reportedly been approved for resettlement in the United States, under the terms of a refugee swap agreement negotiated in 2016 by former President Barack Obama.

The young men were rejected during the Trump administration but approved for resettlement in October by the Biden administration. The State Department did not immediately reply to a request to explain why they have not yet been freed from the hotel and moved to the U.S.

The resettlement agreement, under which the U.S. agreed to consider accepting up to 1,250 of the refugees in exchange for Australia accepting asylum-seekers from Central America, emerged as a point of controversy in 2017, when a leaked call transcript revealed that then-President Donald Trump complained to Australia’s then-Prime Minister Malcolm Turnbull about the deal. Although Turnbull assured Trump that the refugees were being detained “not because they are bad people” but as a way to crack down on people-smuggling, Trump was apparently unable to grasp that concept. “I hate taking these people,” Trump said. “I guarantee you they are bad. That is why they are in prison right now.”

Despite Trump’s misgivings, the U.S. did slowly proceed with resettlement for 870 refugees from Iran, Bangladesh, Somalia, and Myanmar who had endured years of detention in Australia’s Pacific island camps.

According to data from the Kaldor Centre for International Refugee Law at the University of New South Wales, Sydney, 968 refugees had been resettled in the United States as of June 30, 2021.

Djokovic, whose refusal to get vaccinated is part of a broader set of unscientific beliefs, is expected to argue in court Monday that he should be allowed to take part in the Australian Open because the organizers previously accepted his claim to have been infected with the virus within the past six months.

The post Refugees Detained With No-Vax Djokovic in Australia Suddenly Have World’s Attention appeared first on The Intercept.