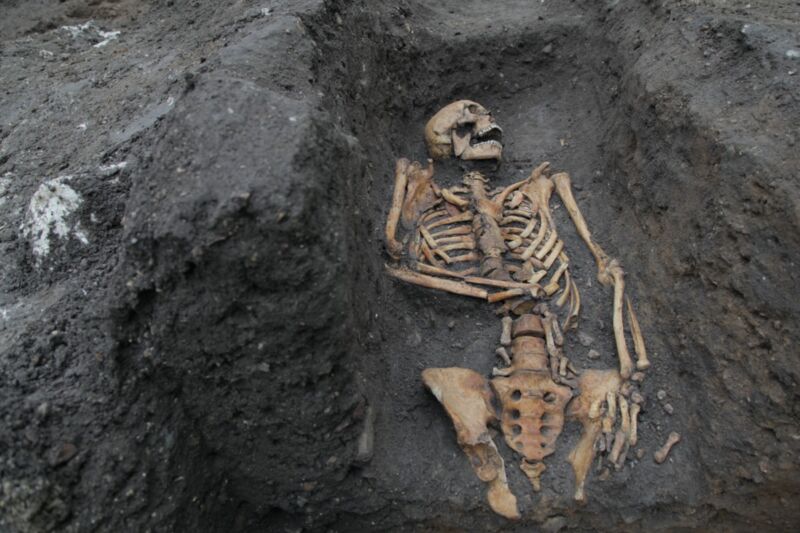 Written in the bones: Medieval skeletons tell story of social inequality in Cambridge

Enlarge / The remains of an individual buried in an Augustinian friary, excavated in 2016 on the University of Cambridge’s New Museums site.

There’s rarely time to write about every cool science-y story that comes our way. So this year, we’re once again running a special Twelve Days of Christmas series of posts, highlighting one science story that fell through the cracks in 2020, each day from December 25 through January 5. Our final post in the 2021 series: Skeletal remains excavated from medieval sites in Cambridge reveal occupational and social disparities in the population.

A working class woman who suffered from domestic violence. A friar who may have been the victim of a horse-and-cart hit-and-run. Those are just two examples of the remains of 314 people excavated from three very different medieval burial sites in Cambridge, England. The evidence of skeletal trauma on many of those remains sheds light on what medieval Cantabrigian lives were like, in terms of occupation, living conditions, and social status, according to a paper published last January in the American Journal of Physical Anthropology.

The research stems from the After the Plague project at Cambridge University’s Department of Archaeology, which explores how historical conditions influence health and how health, in turn, shapes history. The project particularly focuses on the Black Death period (1347-1350 CE) in later medieval England, which wiped out between a third and a half of Europe’s population.