Every year, children meet with Santa Claus to tell them their wishes for the holiday season. Adults and older kids know that these people are mere mortals, but that doesn’t stop the Christmas magic. Carrie Noël witnessed this firsthand when her daughter Haidyn visited with a mall Santa. She noticed that the Santa urged Haidyn to stick around after her siblings were done visiting with him, all so that he could talk to her longer. Despite the long line, the man took the time to speak with the emotional 10-year-old whose Christmas wish was that her best friend, Brooklynn, would move back to Indiana where they live.

In a viral post on Facebook, Noël shared about the experience and how much she appreciated the man playing Santa. She wrote that after Haidyn was done meeting with the Santa, she asked her what happened. “First she just said it had to do with what she told him she wanted for Christmas,” the mom wrote. “She ‘knows’ about Santa so I prodded a little further because, umm, I kind of need to know what she asked for.” Shortly after, Haidynn broke down and told her mom about her wish.

“[Santa] told her that he knew how much she misses Brooklynn and that if he could, he would do anything to make her moving back happen. Unfortunately, that wish is simply outside of his realm of magic. He talked to her about her friend and about their relationship and about how much Brooklynn is missed.”

What impressed Noël was the compassionate attention given to her daughter. “I know this Santa gets paid to sit there whether he takes the extra time or not,” she said. “In fact, I’m sure the company he works for would rather he push the kids through as fast as possible since they make their money through picture sales and more visits mean more pictures.”

“Regardless of that fact, he took the extra time to talk to and then truly LISTEN to a 10-year-old little girl and comfort her heartbreak. He didn’t need to do that. She knows her parents play the role of the gift-giving Santa. She knows that there isn’t magic during this season in the traditional way kids think of when they think of Santa. Yet he decided it was worth his time to speak to her heart.”

The Santa couldn’t have known that Haidyn would get a version of her Christmas wish; Brooklynn and her family were coming back as a surprise for Noël’s family shortly after Christmas. “He didn’t know that while the wish for her friend to move back won’t come true, she will get to spend time with her. He didn’t know that he IS helping make this Christmas extra magical for my sweet little girl who thinks she knows the secrets behind Christmas and the true magic of the season.”

When she created the Facebook post, Noël’ didn’t know the real name of the man who played Santa. But thanks to the power of the internet, Santa has been found. She updated the post to include a shoutout to him. “Thank you so much Dieter Schneider for perfectly embodying the role you play in the lives of these children and our community.”

When Carrie Noël took her kids to see the mall Santa, she noticed that the Santa spent extra time comforting her daughter Haidyn, whose Christmas wish for her best friend to move back home.

Noël was grateful this stranger had spent time listening to her heartbroken daughter and shared the experience on Facebook.

What the Santa couldn’t have known is that Haidyn and her friend would be reunited for a few days shortly after Christmas.

READ: Caring Mall Santa Goes Above and Beyond to Comfort a Girl Feeling Heartbroken Over the Holidays 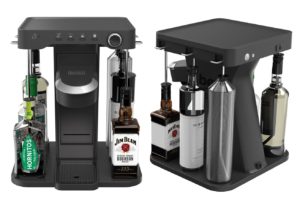