The front of the Pixel 5a. It’s got a great design at any price point. [credit:
Ron Amadeo ]

I think at this point we can call the Pixel A series a “mid-range powerhouse.” Google has again turned in one of the best mid-range phones out there, thanks to its no-nonsense software with day-one OS updates, a long-lasting battery, and good-enough, modern internals. In a world full of wild gimmicks and smartphones with a thousand extras, Google is going with just the basics for $449. It’s not really what you would call “new” or “exciting,” but for basic usage, the Pixel 5a has everything you need in a smartphone and nothing you don’t.

On the surface, the Pixel 5a looks very similar to the previous release in this line. You get a good-enough, modern design with a slim bezel and a hole punch camera on the front, plus a gloriously flat, undistorted screen. There’s a wraparound plastic back that looks kind of plain, just like the Pixel 4a (it’s fine, but we still prefer the two-tone stylings of the Pixel 3a back). Being mid-range means you get some throwback features you might still like, like a rear capacitive fingerprint reader (as opposed to the in-screen fingerprint readers you’d get on a flagship phone) and a headphone jack.

SPECS AT A GLANCE

There are some big additions this year, though. The first, which isn’t noticeable from the pictures, is that the Pixel 5a is a lot bigger than the 4a. You’ll see this not only in the screen size (6.34-inches versus 5.81-inches) but also in the body, with the Pixel 5a measuring 154.9 mm × 73.7 mm compared to the 144 mm × 69.4 mm of the 4a. The bigger body comes with the same primary benefit as all big phones—a bigger battery. The Pixel 5a is getting a huge upgrade to a 4680mAh battery, and that comes with a giant runtime advantage over its predecessor. I never had an issue lasting an entire day with the Pixel 4a battery, in fact you could easily go for two light-usage days. 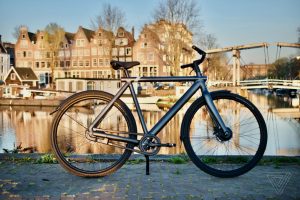 Next post Today at Apple Creative Studios expanding to Chicago and Washington, D.C.