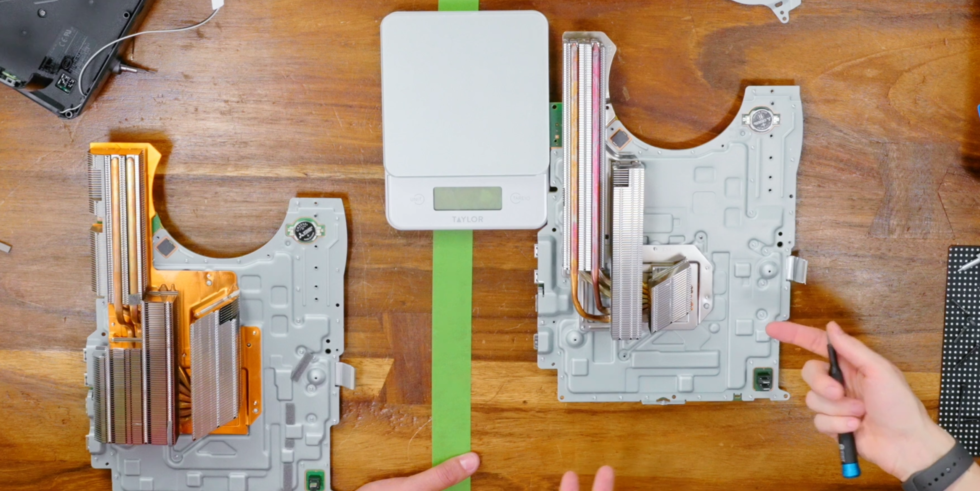 Over the weekend, Sony’s curious new PlayStation 5 hardware revision—same price, same performance, slightly changed internals—began finding its way into fans’ hands, and at least one rushed to figure out exactly why it weighs 0.6 lb less than the launch model. The most obvious answer, at least parceled out on a measuring scale, is a smaller, wholly redesigned heatsink element, though the person behind the discovery didn’t necessarily make the right call about this PS5 revision being “worse.”

Tech reporter Austin Evans posted his findings on YouTube on Saturday, after sourcing a new Japanese PS5 and upgrading his purchase to overnight shipping (holy bank account, Batman). The resulting breakdown is informative, though not entirely authoritative. Evans and fellow YouTuber Jimmy Champane tore down both the new PS5 and a launch model in short order, noticing almost immediately that the newer heatsink takes up far less physical real estate. Before the teardown is complete, one visible heatsink portion near the system’s primary fan is reduced enough that a finger can fit in, but that’s nothing compared to the final comparison.

The launch model’s heatsink included a complete airflow-encompassing plate of copper, along with conductive metal all along the way. The updated heatsink, on the other hand, has been re-engineered to reduce both the base copper plate and the amount of metal attached to the cooling system’s heat pipes, all while leaving the heat pipe concept intact—and likely still relying on a liquid metal application on PS5’s System-on-Chip (SoC). After weighing the two consoles while fully assembled, Evans then weighed the extracted heatsink constructions, finding these accounted for nearly the entirety of the 0.6 lb difference.