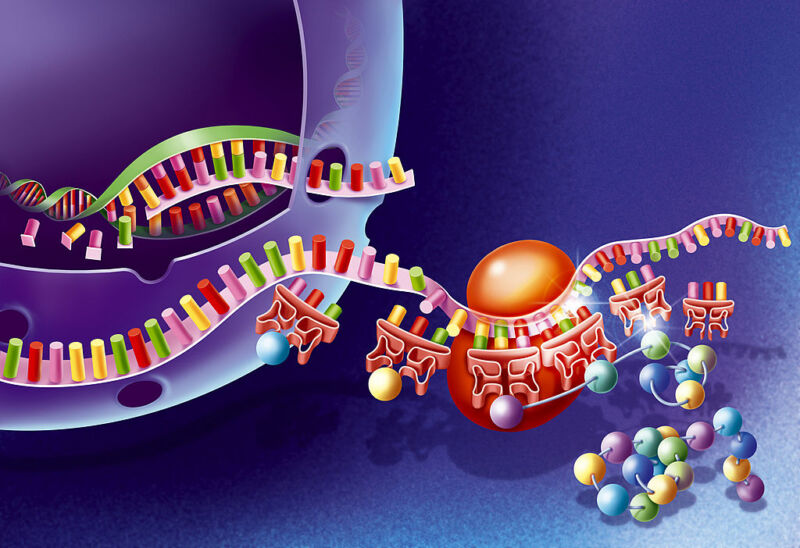 Enlarge / A cartoon of the process that translates the genetic code in DNA into a protein. (credit: BSIP / Getty Images)

All living things on Earth use a version of the same genetic code. Every cell makes proteins using the same 20 amino acids. Ribosomes, the protein-making machinery within cells, read the genetic code from a messenger RNA molecule to determine which amino acid to put next into the particular protein they are building.

This code is universal, which is why the ribosomes in our cells can read a piece of viral messenger RNA and make a functional viral protein from it. There are plenty of other amino acids, though. While life does not generally use them, scientists have been incorporating these into proteins. Now, researchers have figured out a way to greatly expand the genetic code, allowing widespread incorporation of these non-biological amino acids. They accomplish this by running a second set of everything—proteins and RNAs—needed to translate the genetic code.

Non-canonical amino acids can serve a number of functions. They can act as labels so a researcher’s particular protein of interest can more easily be tracked within cells. They can help to regulate a protein’s function, allowing researchers to activate and inactivate it at a specific time and place of their choosing and then observe the downstream effects. If enough of these non-canonical amino acids are strung together, the resulting proteins would constitute an entirely new class of biopolymers that might carry out functions that traditional proteins cannot—for research, therapeutic, or other purposes.