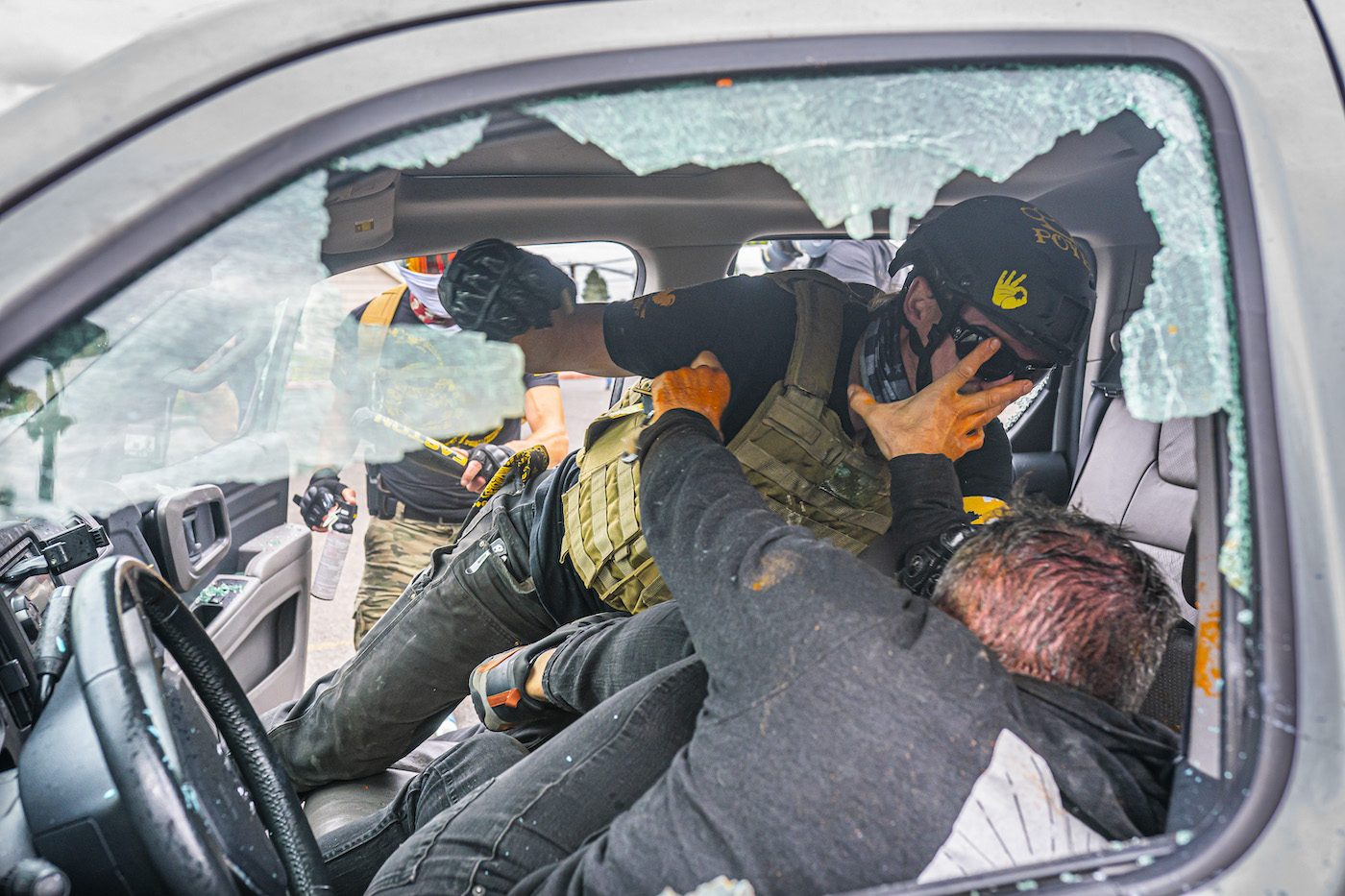 Portland narrowly avoided tragedy on Sunday as the city’s police force abandoned its duty to secure the streets and officers made no effort to stop assaults on residents by members of the far-right Proud Boys gang, many of whom had traveled from around the country to live out their fantasies of attacking anti-fascist protesters.

The absence of the police, in line with a policy on nonintervention announced beforehand by Portland Police Bureau Chief Chuck Lovell, reinforced a sense among anti-fascists that they were on their own. So when a right-wing gunman fired in the direction of black-clad protesters who had ordered him to leave their protest, it was shocking but not surprising that one of the anti-fascists fired back, according to witnesses.

Luckily, all eight shots missed their targets, and there were no reported injuries from the exchange of fire.

The shooting unfolded in broad daylight on a downtown street, in front of reporters who filmed it from multiple angles. Sean Beckner-Carmitchel, an activist and videographer from Los Angeles, captured the sequence of events in a thread he shared on Twitter.

Definitely harrowing stuff. I was not present during the initial interaction, but sources telling me the man was chased out by Bloc protestors after yelling a slur towards the group. While being chased out, the man pulled out a fire arm. pic.twitter.com/y6nMmIkD6Y

Arrest made of the shooter. Will post more soon. pic.twitter.com/h466xxIj1r

The fact that the right-wing gunman — 65-year-old Dennis Anderson from the neighboring city of Gresham — was arrested within minutes by an undercover officer and two uniformed colleagues underscored for many protesters that the police could have intervened earlier but had chosen not to do so.

.@_jlevinson has photos of the man who appeared to open fire on anti-fascists downtown. It does not appear anyone was injured. pic.twitter.com/bN8OUtu19c

The Oregonian reported that Anderson — who was charged with unlawful use of a weapon and unlawful possession of a firearm before being released on bail — had been standing at the fringes of the anti-fascist protest for hours before the shooting and told one of their reporters that the left-wing activists were “the real fascists.”

The police said on Monday that they are looking for the person who fired back at Anderson and suspect that evidence, in the form of a bullet, might have been removed from the scene before they arrived.

When officers finally did arrive at the scene of the shooting, they were met with sarcastic applause from several anti-fascist activists, including Dustin Brandon, who had been in the line of fire.

Portland police are on scene, a supervisor says police have a perosn in custody pic.twitter.com/ht0JujXBcE

“Where were you guys, when you knew they were coming today?” Brandon asked one officer. “You could’ve prevented this.”

Survivor is yelling at the police for not stopping the violence. pic.twitter.com/Y7o5h148AW

“You’re pointing at me,” one officer told Brandon. “I am not the chief of police.”

In a statement released on Friday, Lovell, who answers directly to Mayor Ted Wheeler, had stunned many Portland residents by telling protesters that the police would not protect them from right-wing violence. “This is our main message: if you are planning to come down to instigate fights with those you disagree with, don’t come,” Lovell said. “You should not expect to see police officers standing in the middle of the crowd trying to keep people apart. People should keep themselves apart and avoid physical confrontation.”

Rather than proactively policing the rally by a group devoted to political violence, Lovell only promised that his department was “prepared to monitor this event and may make arrests for crimes when resources allow.”

The gunfire came after a Proud Boys rally about 10 miles from downtown earlier in the afternoon, devoted to the “political prisoners” of Jan. 6, had devolved into violence, with attacks on left-wing protesters who fought back with paintballs, fireworks and pepper spray.

Given what Zakir Khan, a Portland civil rights advocate, described as “a red carpet and a note saying we won’t intervene,” the Proud Boys brutally assaulted several anti-fascists who showed up at their rally in the city’s northeastern Parkrose neighborhood.

In one incident, which was documented by a number of journalists, several Proud Boys attacked the parked vehicle of a man who seemed to be carrying water and shields for anti-fascist protesters. After they smashed the truck’s windows, one of the members of the right-wing gang climbed inside to beat the man and then shoved him as he tried to run away.

A black bloc demonstrator attempts to get away in his truck – Proud Boys only let him leave after assaulting him and destroying his truck pic.twitter.com/AKDugmBzMs

At another point in the afternoon, a group of Proud Boys stopped a white van and forced its driver from the cab by firing an airsoft rifle and pepper spray at point-blank range. When the van then rolled slowly forward into a hedge after the drive fled, propagandists for the right-wing group tried to claim that it was an “antifa van that crashed into the rally.”

Far-right propagandist Andy Ngo claimed several times yesterday that this van “crashed into a rally” before the Proud Boys destroyed the van and flipped it over.

This video shows that Andy is lying. Proud Boys surrounded the van and car-jacked the driver. pic.twitter.com/3FUuH96DuJ

With no police around to stop them, the Proud Boys then smashed the van’s windows and flipped it over, shouting “fuck antifa” and painting “FAFO,” short for “Fuck Around and Find Out,” on its roof.

Portland police are nowhere to be seen pic.twitter.com/OrvB3ouE2d

Although multiple assaults were captured on video by journalists on the scene, the police failed to intervene or even appear in the Parkrose neighborhood. Wheeler’s spokesperson, Sara Morrissey, told Oregon Public Broadcasting that officers were nearby and ready to intervene if the violence had crossed some unstated boundary. “Had the situation worsened, police would have taken action immediately,” she said.

There were also reports of attacks on journalists from both right-wing and left-wing activists.

A person in black bloc calls a reporter a “slut,” throws her to the ground and pepper sprays her. They also smashed her phone.

People in block threw cans of soda at us while we were trying to wash the mace out of her eyes. https://t.co/bVhbeFk0ZC

I got hit with a paintball. They are shooting paintballs and pepper spray at press and demonstrators. pic.twitter.com/CgFYB5otcO

While the gun battle in downtown Portland frightened and enraged many residents of the city, one national news outlet that had previously devoted hours of coverage to protest violence there, Fox News, barely mentioned that a right-wing gunman had opened fire on left-wing protesters on Sunday.

Even though several prominent right-wing video journalists were on hand to cover the Proud Boys rally and anti-fascist protest, a brief report on the violence was the very last of 202 articles on the Fox News home page on Monday morning. The Fox report, which only mentioned the shooting in passing, and included none of the dramatic video of the incident, was headlined: “Antifa members throw explosives, disperse chemical spray in violent Portland riots.”

The post Portland’s Bizarre Experiment With Not Policing Proud Boys Rampage Ends in Gunfire appeared first on The Intercept. 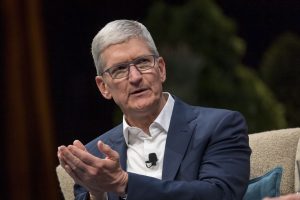