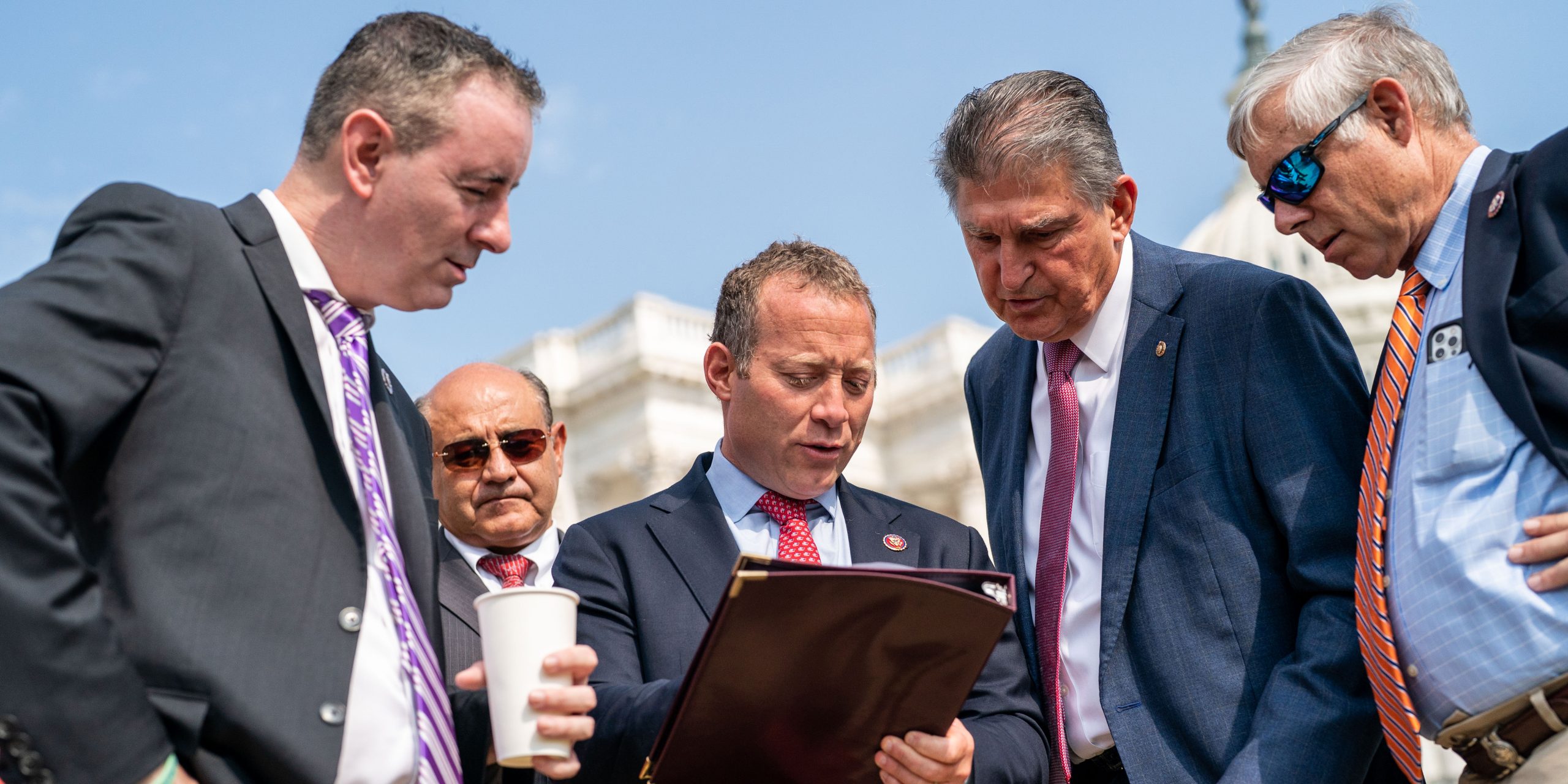 The House of Representatives is often compared to a high school, and it’s a useful metaphor. Both have overlapping hierarchies that are at once defined and undefined, official and unofficial. There are official positions, like captain of the varsity basketball team or chair of the Ways and Means Committee, but there are also social hierarchies: who’s cool and who’s not; who has genuine power and who doesn’t.

For new members of Congress, one of the rites of passage is first-year hazing at the hands of more senior members. These rituals all have layers of different purposes, and how a member handles their hazing can influence the relationships they have going forward.

Josh Gottheimer reported to Congress after winning a 2016 election to represent a wealthy district south of Wall Street, and the ribbing at the weekly New Jersey delegation meetings began immediately. Yet five years later, the hazing — much gentler than it might be in a high school sports team — hasn’t stopped. Members of the delegation simply couldn’t bring themselves to stop giving Gottheimer a hard time. Whether it was Rep. Albio Sires putting a stopwatch on his phone whenever Gottheimer arrived, to time how long it took him to leave — never very long — or Reps. Bill Pascrell and Don Norcross mocking him for barely being a Democrat, the hazing has gone on for five years.

The reason is simple: Gottheimer’s colleagues simply do not like him — and that would be trivial gossip of concern to nobody outside a congressional cafeteria if it wasn’t having a real-world effect right now on the prospect of the Biden administration enacting both its bipartisan infrastructure plan and the accompanying $550 billion in infrastructure spending.

Gottheimer and eight of his colleagues have been facing off with House Speaker Nancy Pelosi, D-Calif., insisting in a letter sent last week that she bring the bipartisan package for a vote “immediately,” rather than holding it back as leverage to pass the bigger piece. The not-so-veiled goal is to strip progressives of the leverage they have to enact a big reconciliation package, making it more vulnerable to being cut down to size or stopped entirely. Gottheimer worries the larger legislation will mean painful tax hikes on corporations and the wealthy — many of whom have supported his political ambitions. (A spokesperson for Gottheimer did not respond to a request for comment.)

During a House Democratic leadership call on Sunday night, Pelosi mocked Gottheimer’s effort as “amateur hour,” pledging to push ahead despite his threats to stop the legislation. Pelosi is not known for miscounting votes, suggesting that she is confident that enough of Gottheimer’s eight co-dissenters will not stick with him; she’s known to work the phones relentlessly and leaves little to chance.

In some respects, Democrats lucked out in the identity of the lead member of what’s been dubbed the “suicide squad.” Had the effort been organized by somebody less despised internally than Gottheimer, it may have gained more traction. “Josh Gottheimer continues his perfect streak of being the absolute worst member of the House Democratic caucus,” texted one member of Gottheimer’s business-friendly New Democrat Coalition. “A more likeable member could do more damage. But the fact that so many of my colleagues (and across the ideological spectrum mind you) consider him such [an unpopular figure] really does limit his influence.”

At least Gottheimer is making (some of) his donors happy with his challenge to Pelosi. Some of Gottheimer’s largest contributors this year work in private equity, investment banking, and corporate law — all of which stand to gain from the infrastructure bill’s giant investment in public-private partnerships but stand to lose a small portion of their profits if new tax increases are enacted.

According to data from the Federal Election Commission, his PAC, Josh Gottheimer for Congress, raised nearly $2 million in the first half of this year. NORPAC, a group dedicated to promoting strong supporters of Israel, gave $50,000 — most of which was earmarked for Gottheimer by individual donors, like the CEO of the multibillion-dollar Zimmer Partners hedge fund and his family.

Another $26,000 came from the Gottheimer Luria Torres Victory Fund, which is mostly bankrolled by New York-based private equity investor Eric Edell, his wife Deborah, and Randall Winn, a private investment executive based in Florida. Eric Edell and Winn co-manage an investment firm called 22C Capital, and the three collectively donated more than $17,000 to Gottheimer’s PAC during the first six months of 2021 as well.

Another $13,000 came from executives at Comcast, the largest internet service provider in the U.S., which is slated to make huge gains from the infrastructure package’s $65 billion broadband investment.

These kinds of institutions stand to lose from the reconciliation bill’s tax hikes needed to offset the spending increases and have long been messaging about the risks to their investors and clients. On August 11, Sullivan & Cromwell, for example, issued a memo on Oregon Democrat Sen. Ron Wyden’s bill to close a private equity tax avoidance loophole, warning it would result in capital losses. (The corporate raider industry has been accustomed to unprecedented growth in recent years.)

Gottheimer’s effort to thwart the budget resolution has also been stunted by its tardiness, Democrats in Congress said.

“He was late to the game and is having a hard time realizing CPC leadership outsmarted him,” said one senior member of the Congressional Progressive Caucus. “We whipped early and had Dem leadership on board with our strategy like 5 months ago.”

The makeup of Gottheimer’s eight other renegades does not augur well for his rebellion. Pelosi can afford to lose three votes and still get to the 217 she needs, assuming every Republican votes no. There are three vacancies: two in Democratic seats and one Republican seat. (Shontel Brown won’t be seated until November thanks to scheduling done by Ohio’s Republican governor; the seat is only open because Biden named former Rep. Marcia Fudge to be secretary of Housing and Urban Development.)

The eight that Gottheimer was able to cobble together for his letter are: Carolyn Bourdeaux of suburban Georgia; Jared Golden, from a Trump district in Maine; Ed Case from a deep blue district in Hawaii; Jim Costa, from the Central Valley in California; Kurt Schrader, from the central coast of Oregon; and Filemon Vela, Vicente Gonzalez, and Henry Cuellar, who represent adjacent districts in Texas along the southern border with Mexico.

Assuming Gottheimer himself holds firm and votes no, his most likely ally of that bunch is Schrader, a veteran Blue Dog who often bucks the party. Beyond those two, the list doesn’t include any members who Pelosi would have a hard time swaying her direction — whether it’s reminding Costa and Schrader that redistricting is coming to their Democratic-controlled states, or reminding Cuellar that she campaigned and fundraised for him when he faced a challenge from Justice Democrat Jessica Cisneros last cycle. Cisneros is running again, and Vela and Gonzalez will also need Pelosi’s fundraising largesse this cycle as they face difficult races in redistricted Texas.

Case would be crushed in a primary for tanking Biden’s presidency and is known to be highly concerned about climate change, so despite his penchant for deficit hysteria, he’s not a threat to the bill. And the idea that a first-term lawmaker, Bourdeaux, would stare down Pelosi is hard to imagine, especially since Rep. Lucy McBath from the neighboring suburban Georgia district is strongly backing both bills. Golden has shown independence, and Pelosi is likely to give him a pass, meaning she won’t object to his no vote, knowing she has the votes she needs and he believes distinguishing himself from Democrats in the general election is beneficial. (And he’s probably not wrong.)

“The dynamic of Congress is different and moderates aren’t really doing as well as they were under Trump and the Republican Senate,” said the senior CPC member. “Schumer, Pelosi and Biden are finding their agenda isn’t far from the CPC agenda and it’s an easier partnership than with moderates.”

“The dynamic of Congress is different and moderates aren’t really doing as well as they were under Trump and the Republican Senate.”

In 2010, Pelosi managed to win a majority for a climate change bill and for the Affordable Care Act, both of which were considered by swing-district Democrats to be political losers. Those who voted yes did so not because they thought there was a political advantage for them, but because the window for action was closing and party loyalty won out. This time, vulnerable Democrats think there could in fact be political upside in delivering on Biden’s agenda — the climate money, the child tax credit, universal pre-K — along with some potential downside, namely getting blasted for inflation.

But the latter is coming regardless of what Democrats do, so their plan is a novel one in American politics: Actually deliver something, and then run on it. No matter what Josh Gottheimer might think of it.

The post Josh Gottheimer’s Rebellion Was in Trouble From the Start appeared first on The Intercept.