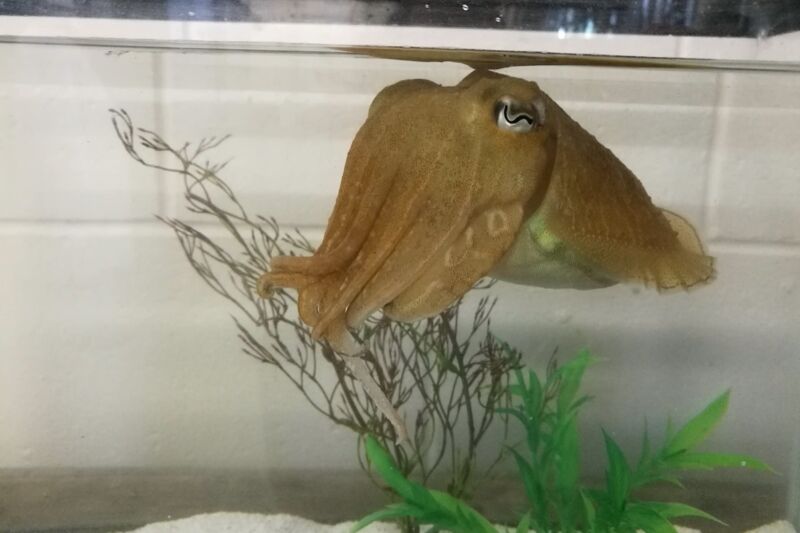 Cuttlefish remember the what, when, and where of meals—even into old age

Enlarge / A cuttlefish leisurely hanging out in a tank. A new study found that cuttlefish can remember specifics of place and time for receiving their favorite yummy food rewards. (credit: University of Cambridge)

Can you remember what you had for dinner last weekend? That ability is a function of episodic memory, and how well we can recall the time and place of specific events typically declines with age. Cuttlefish also seem to exhibit a form of episodic memory, but unlike with humans, their capability doesn’t decrease as they get older, according to a new paper published in the Proceedings of the Royal Society B.

“Cuttlefish can remember what they ate, where, and when, and use this to guide their feeding decisions in the future,” said co-author Alexandra Schnell of the University of Cambridge, who conducted the experiments at the Marine Biological Laboratory in Woods Hole, Massachusetts. “What’s surprising is that they don’t lose this ability with age, despite showing other signs of aging like loss of muscle function and appetite.”

Earlier this year, we reported on a study by Schnell and other colleagues showing that cuttlefish can delay gratification. Specifically, they could pass a cephalopod version of the famous Stanford marshmallow test: waiting a bit for their preferred prey rather than settling for a less desirable prey. Cuttlefish also performed better in a subsequent learning test—the first time such a link between self-control and intelligence has been found in a non-mammalian species.