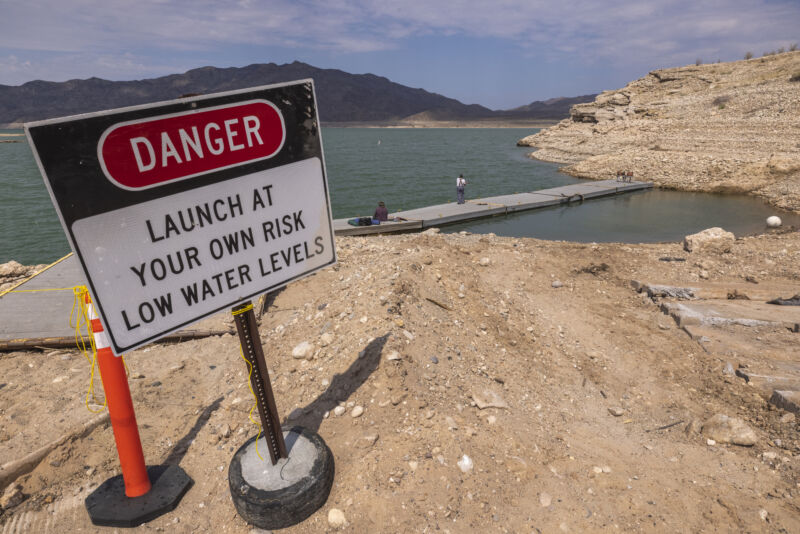 Enlarge / A dock, which has become unusable as a worsening drought drops the water level of Lake Mead to new historic low records, is seen at South Cove near the upper reaches of the reservoir near Meadview, Arizona. (credit: David McNew/Getty Images)

Two decades of drought have exacted a heavy toll on the Colorado River, bringing Lake Mead to its lowest level since 1937, when the reservoir was filling behind the newly completed Hoover Dam. That situation has prompted the US Bureau of Reclamation to declare the first-ever shortage for water users along the river.

Arizona, Nevada, California, and Mexico all rely on Lake Mead for fresh water, and all but California will see their supply drop due to negotiated agreements among those and four other states that draw water from the Colorado River. Nevada has already reduced its use through conservation, so the state doesn’t expect to be affected, but Mexico will see a 5 percent reduction, and Arizona will have its allocation slashed by 18 percent.

“Reclamation does not take these actions lightly or do so easily. We do so because it is necessary, protecting the system and implementing the agreements we have in place,” Bureau of Reclamation Deputy Commissioner Camille Touton said in a news conference.

Previous post After a dozen flights, NASA’s chopper has yet to come a cropper