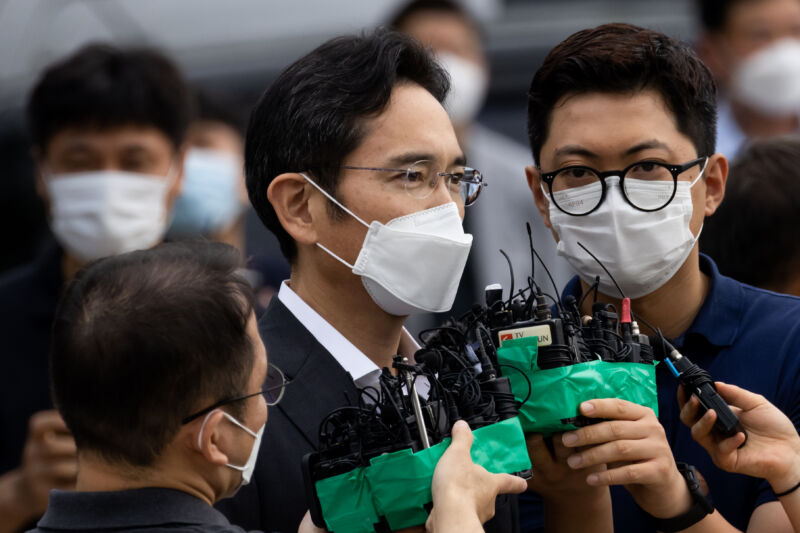 Enlarge / Jay Y. Lee, leader of Samsung Group, speaks to members of the media as he is released from the Seoul Detention Center in Uiwang, South Korea, on Friday, Aug. 13, 2021.

Samsung Group’s leader, Jay Y. Lee, is out of jail on parole today. Lee was serving a 30-month sentence for his role in “Choi-gate,” a major 2016 South Korean political scandal that brought down South Korean then-President Park Geun-hye.

In 2017, Lee was originally sentenced to five years in jail after being found guilty of bribery, embezzlement, capital flight, and perjury charges. An appeal and re-trial cut Lee’s five-year prison sentence down to 30 months after suspending the charges for bribery and embezzlement. Lee served 18 months of that sentence, and now he’s out on parole.

Choi-gate is an incredible rabbit hole you can dive into at the above Wikipedia link, but the basics are that it is named for Choi Soon-Sil, a shamanistic cult member and a woman often called “Korean Rasputin,” due to her influence over South Korea’s then-President. Lee was accused of bribing Choi to get a favorable ruling from Park related to a 2015 merger of two Samsung affiliates, Samsung C&T Corp (that’s “Construction & Trading”) and Cheil Industries, a Korean textile firm.