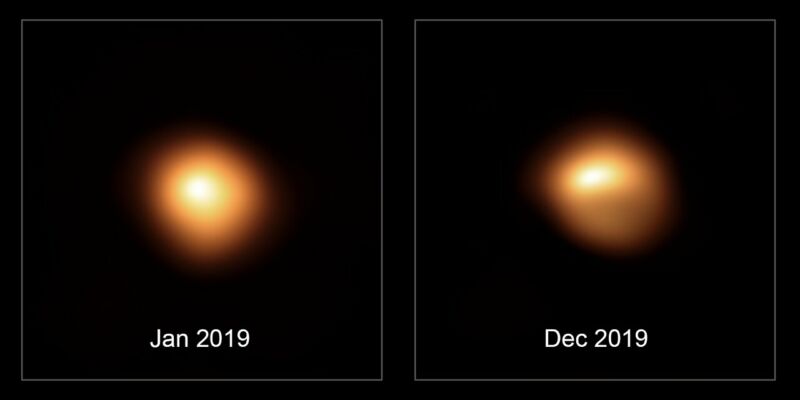 Back in June, we reported on a likely explanation for the strange, dramatic dimming of Betelgeuse, a bright red star in the Orion constellation: The star burped out a massive gas bubble, resulting in lower temperatures that condensed heavier elements into dust that temporarily obscured the starlight. Now, a team of Chinese scientists has found evidence of a large, dark, cooler spot on the star—consistent with those earlier findings—based on spectral analysis, according to a recent paper published in the journal Nature Communications.

As Ars’ John Timmer reported last year, Betelgeuse is one of the closest massive stars to Earth, about 700 light-years away. It’s an old star that has reached the stage where it glows a dull red and expands, with the hot core only having a tenuous gravitational grip on its outer layers. The star has something akin to a heartbeat, albeit an extremely slow and irregular one. Over time, the star cycles through periods when its surface expands and then contracts.

Astronomers noticed the pronounced dimming of the light from Betelgeuse in December 2019; the difference was even visible to the naked eye. And the dimming persisted, decreasing in brightness by 35 percent in mid-February before brightening again in April 2020. Astronomers puzzled over the phenomenon and wondered whether it was a sign that the star was about to go supernova.

Previous post How in the world did these AMD RX 6600 XT GPUs sell at or under MSRP?