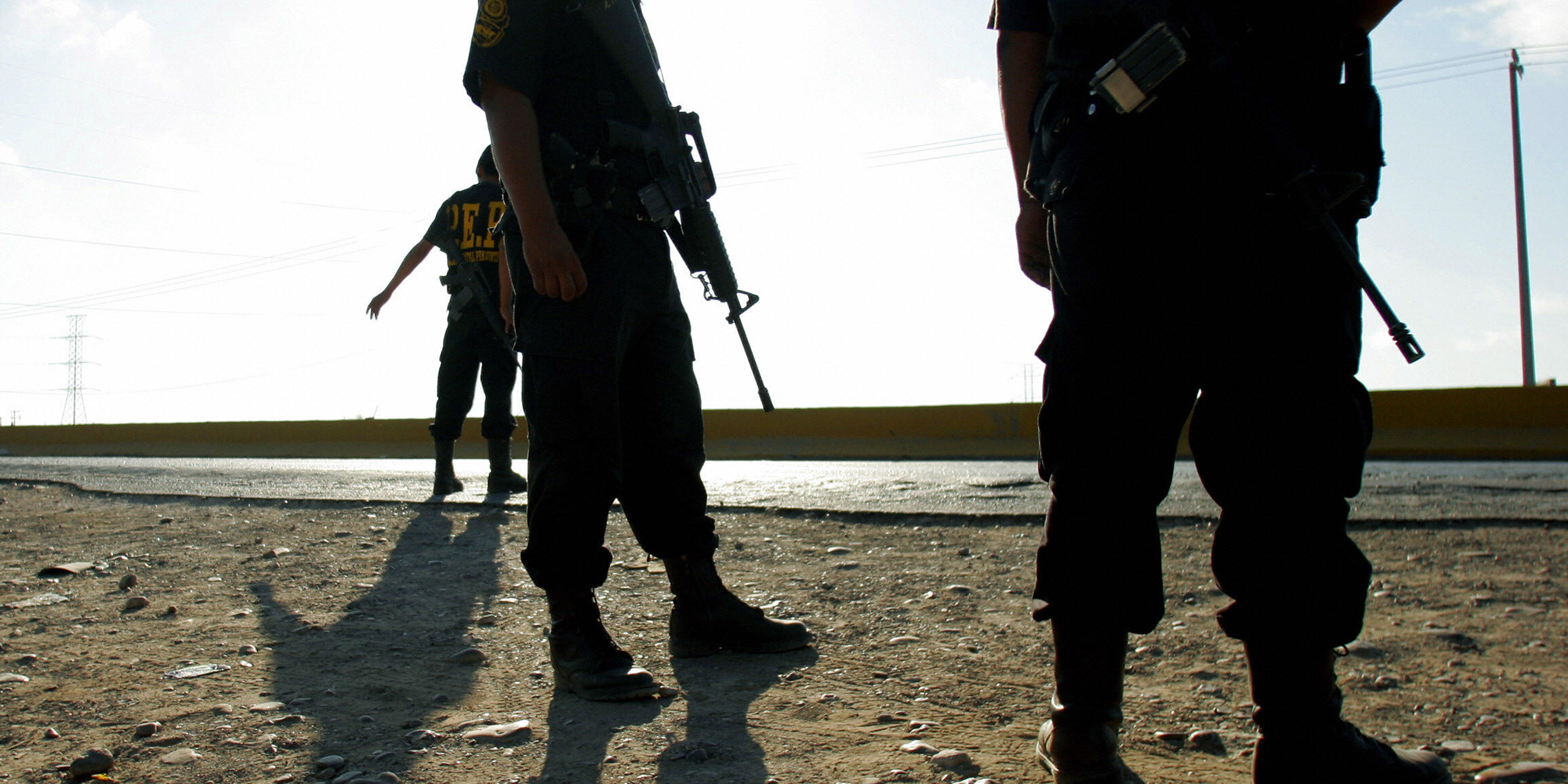 Less than eight months after his officers allegedly committed a brazen massacre just miles from the Texas border, the commander of an embattled Mexican police special operations unit received awards from the Drug Enforcement Administration and Immigration and Customs Enforcement for his team’s extensive and continuing collaboration with U.S. law enforcement agencies.

Last week, Félix Arturo Rodríguez Rodríguez, the commander of an elite U.S.-trained state police unit, made an appearance at the American consulate in Matamoros, a border city in the northeastern state of Tamaulipas, home to some of the worst drug war violence of the past decade. Photos posted by the state government showed Rodríguez — who the DEA’s own Phoenix office had previously advised was wanted by Interpol — receiving a pair of plaques from the DEA and ICE’s Homeland Security Investigations, or HSI, wing for his “exceptional,” “outstanding,” and “continuous contributions” to joint U.S.-Mexico law enforcement efforts.

Twelve of Rodríguez’s officers are currently in Mexican government custody, accused of massacring 19 migrants and incinerating their remains in late January. Rodríguez and his officers have been linked to a string of kidnappings and extrajudicial killings going back years. The unit is considered the personal enforcement arm of the governor of Tamaulipas, Francisco García Cabeza de Vaca, a prominent ally of some U.S. border hawks and currently under investigation by federal authorities in Mexico City for money laundering and organized crime. Rodríguez has not been charged in connection with the January massacre. In a statement, the DEA told The Intercept it had confirmed that the commander “currently has no outstanding warrants, domestically or internationally.”

“Grupo de Operaciones Especiales (GOPES) Commander Arturo Rodríguez Rodríguez was recognized for the support that he and his unit have provided to several bilateral investigations and fugitive apprehensions,” the drug agency said. “Specifically, Commander Rodriguez’s group was critical in locating U.S. fugitive Eduardo Zamora, who was wanted in Texas for killing two women and injuring an off-duty U.S. Marshal in Harlingen, Texas.” Zamora was killed by the GOPES, the special operations group, on July 4, in what Mexican authorities described as a shootout, though there has been sparse additional reporting on the case.

The State Department declined to comment on its role in last week’s award ceremony, deferring to the DEA. ICE did not provide a comment despite multiple requests. The Intercept contacted the state prosecutor’s office in Tamaulipas, which is handling the case stemming from the January massacre, for more information but did not receive a response by publication.

“There is no really meaningful U.S. strategy, and certainly not a strategy that has done anything to critically examine the way the ‘war’ is being fought.”

The Tamaulipas Ministry of Public Security, in a statement last week, said the DEA and ICE awards reflected the “outstanding service that GOPES has performed in the fight against crime and the cooperation that exists between the HSI, the DEA and the Government of Tamaulipas.” The statement noted that since 2018, Tamaulipas state police have collaborated with seven U.S. federal agencies in a campaign that has produced more than 300 arrests as well as the seizure of more than 1,000 firearms and millions of dollars in cash and property.

Michael Lettieri, a senior human rights fellow with the Center for U.S.-Mexican Studies at the University of California San Diego, described the fact that a pair of local DEA and HSI offices would see fit to honor a Mexican official whose unit is currently the subject of high-profile mass murder investigation as “bonkers.”

“It just tells me that management of this stuff is totally incoherent and discombobulated,” Lettieri told Intercept. “There is no really meaningful U.S. strategy, and certainly not a strategy that has done anything to critically examine the way the ‘war’ is being fought.”

In the past decade and a half, the U.S. government has spent billions of dollars training, equipping, and advising Mexican security forces at all levels and participating in countless investigations, raids, and surveillance operations in the name of combating drugs and organized crime. The result: more than 300,000 dead, more than 80,000 disappeared, and an unending stream of guns flowing south and drugs flowing north.

Rodríguez’s 150-member GOPES became operational last year. The SWAT-style, rapid-reaction force is hardly unique. In Mexico, agencies like the U.S. Agency for International Development provide professionalization and human rights training for Mexican security forces, Lettieri said, and in his experience, they are genuinely “risk averse” when it comes to the reputational damage that can come from association with problematic units. At the same time, he said, “when for sort of internal political reasons, Mexican politicians go this route of militarized enforcement, the U.S. doesn’t object.” The specialized units that result often become the muscle of criminal power brokers — some in government, some not. Collaborations between such units and U.S. law enforcement agencies, in training and operations, is ubiquitous across the border.

In the GOPES case, the unit is a rebranded iteration of the Centro de Análisis, Información y Estudios de Tamaulipas, or CAIET, a similarly oriented team that Rodríguez also led.

In 2019, the DEA’s Phoenix field office circulated a bulletin alerting personnel that the commander was wanted by Interpol and that CAIET was essentially a kidnapping ring with badges. Under Cabeza de Vaca, Rodríguez’s teams used official vehicles to “carry out ‘operations’ where they detain people, who in most cases are missing and even handed over to organized crime groups,” the DEA bulletin read. Describing one such operation earlier that month, the DEA reported: “They kidnapped 7 people and according to their relatives, demanded the payment of a ransom, which, although it was paid, did not release the victims, whose whereabouts are unknown.”

Rodríguez did not appear in a search of Interpol’s publicly accessible “red notice” database this week. Noting that “many Red Notices are not made public,” the international policing agency told The Intercept that it does not “comment on specific cases or individuals except in special circumstances and with the approval of the member country concerned.”

The same month that the DEA issued its bulletin, law enforcement officials in Starr County, in South Texas, invited Rodríguez and his officers to participate in joint-training exercises. As InSight Crime, a news outlet specializing in crime and security issues in Latin America, noted in a thorough profile of the GOPES, the government of Tamaulipas produced a video celebrating the “unprecedented” event. Nine months later, in September 2019, Rodríguez’s officers were accused of kidnapping eight people from their homes, dressing them up as cartel gunmen, and then executing them.

Though human rights advocates found evidence that 40 members of the specialized unit were involved in the murders, only two were charged.

Rather than being disbanded, CAIET was renamed last August. According to ground-level accounts in Tamaulipas, the unit continued to rampage through communities in northern Mexico like a paramilitary gang. In early January, more than two dozen families from the community of Ciudad Mier fled to Mexico City after the GOPES descended on their town. They described violent raids, kidnappings, and shakedowns at the hands of a seemingly untouchable U.S.-backed police unit.

As the Associated Press later noted, “A federal legislator even filed a non-binding resolution in Mexico’s Congress in early January to protest beatings and robberies by the unit.” Nine days later, the charred husks of a pair of pickup trucks were found 14 miles south of the Rio Grande near the community of Camargo. The crime scene bore signs of evidence tampering: The vehicles the migrants rode in were riddled with more than 100 bullet holes, yet no shell casings were found.

Among the wreckage were the incinerated corpses of 19 people. Most of the victims were young men and women from rural Guatemala, though 49-year-old Edgar López was also among the dead. López spent nearly half of his adult life working in the U.S. He was arrested in 2019 while clocking out after a graveyard shift at chicken plant in Mississippi. Swept up in one of the largest ICE workplace raids of all time, López was killed trying to get back home to his three children and four grandchildren.

In the wake of the massacre and the arrest of 12 officers, the State Department confirmed that three members of the GOPES “received basic skills and/or first line supervisor training” through its Bureau of International Narcotics and Law Enforcement Affairs in 2016 and 2017, before being assigned to the elite team.

Last week, on the same day that Rodríguez appeared at the consulate in Matamoros to receive his awards, Vice News reported that one of those U.S.-trained members was a regional police commander who “took weekslong classes on human rights and police ethics in 2016 and 2017” and “allegedly went door-to-door trying to flush out survivors” following the attack on the migrants.

Flag-draped coffins carrying the remains of Guatemalan migrants killed near the U.S.-Mexico border in January arrive at in Guatemala City on March 12, 2021.

The Camargo massacre came just four days after Joe Biden was sworn in as president. In the months since then, the administration’s relationship to the U.S.-Mexico border has been principally defined by immigration. The president’s message has been clear: Don’t come.

But migration is only one part of the human rights situation on the U.S.-Mexico border, and what the Biden White House can or will do about the interconnected conditions that led to the tragedy in Camargo, if anything, is less certain.

In the years before Biden took office, the administrations of President Donald Trump and Mexican President Andrés Manuel López Obrador collaborated extensively on migration, with López Obrador making Mexican security forces available for crackdowns on migrants traveling north and the two countries sharing intelligence on journalists, advocates, and immigration attorneys with a proximity to asylum-seekers.

While Garcia Luna remains in U.S. custody awaiting trial in New York, Cienfuegos was released and returned to Mexico just six days before Trump’s term ended. The López Obrador administration accused the DEA of fabricating evidence against the former general — whose tenure was marked by numerous scandals and military-linked massacres — and proceeded to publish hundreds of pages from the U.S. government’s investigation online in response to his arrest.

In Mexico, units like the GOPES have a way of persisting regardless of U.S. aid or who’s in power on the ground.

By March, law enforcement officials on both sides of the border were describing cooperation between the two countries as “paralyzed.” Last month, López Obrador’s top foreign official said the Mexican government has lost interest in the multibillion dollar U.S. security package known as the Merida Initiative, which has formed the backbone of U.S. drug war support to Mexico over the past decade. “The Merida Initiative is dead,” Mexican Foreign Minister Marcelo Ebrard told the Washington Post. Last week, the Mexican government filed a historic lawsuit targeting the American companies that have flooded Mexico with guns.

“It’s a tense moment for the relationship, it really is,” Lettieri said. At the same time, he added, “that it is a tense moment doesn’t necessarily change anything.” In Mexico, units like the GOPES have a way of persisting regardless of U.S. aid or who’s in power on the ground. “When Cabeza de Vaca goes, it’s probably going to be old wine, new bottle,” Lettieri said. “Same officers, new name, similar operating tactics.” Real change, he argued, would require meaningfully new approaches on both the structural and hyperlocal level.

“Right now, I don’t know what we care about — Is it drugs? Is it violence? Because we haven’t done a very good job stopping either,” Lettieri said. The lack of clarity, purpose, or direction is at the heart of the awards Rodríguez received last week, he argued. “I totally believe that a local DEA office would have given an abusive commander an award,” he said. “Because the whole thing is incoherent.”

The post DEA and ICE Award Mexican Police Commander Whose Unit Is Accused of Grisly Massacre appeared first on The Intercept.