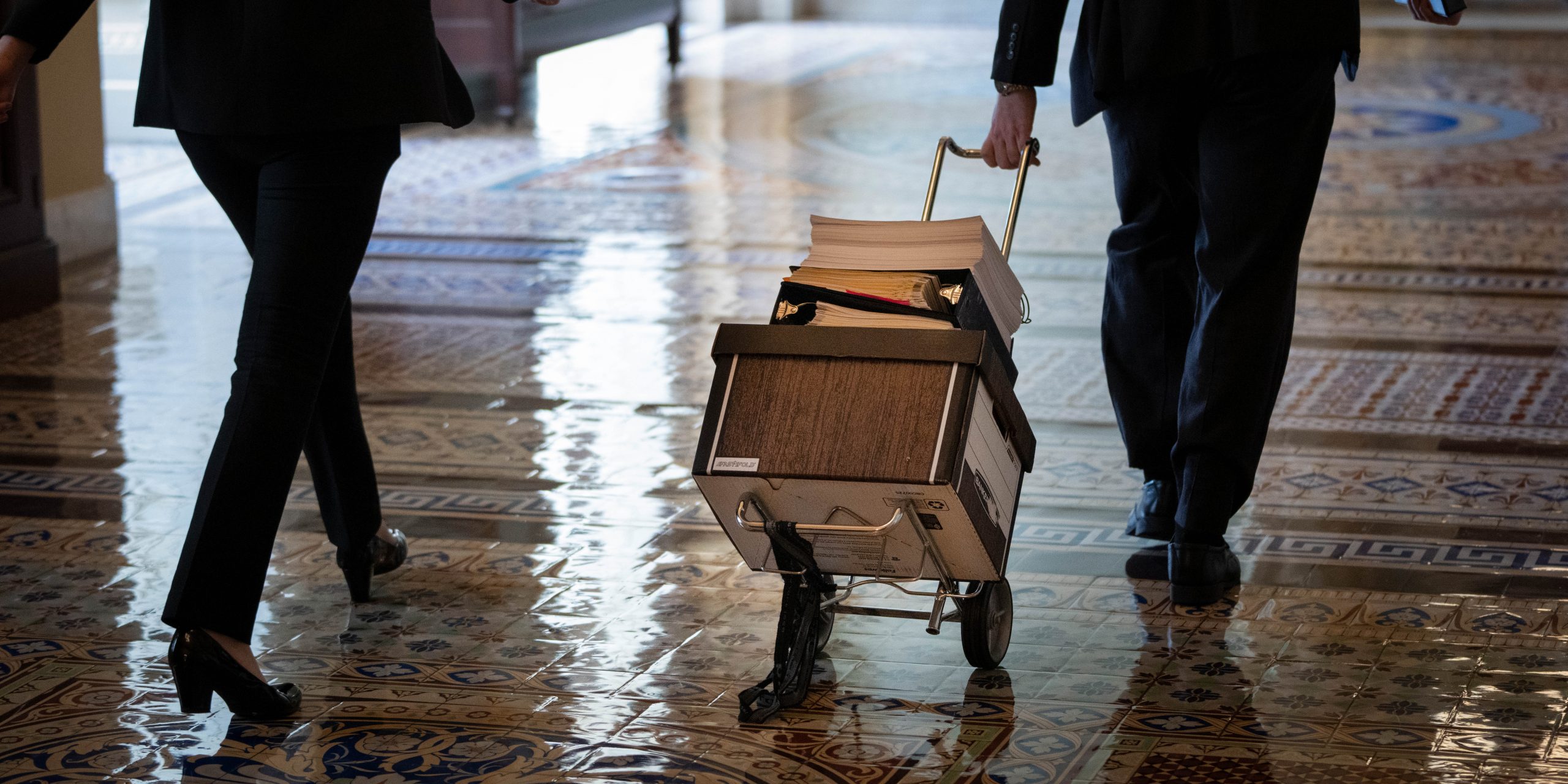 The Senate’s new bipartisan infrastructure bill is being sold as a down payment on addressing the climate crisis. But environmental advocates and academics are warning the proposed spending bill is full of new fossil fuel industry subsidies masked as climate solutions. The latest draft bill would make fossil fuel companies eligible for at least $25 billion in new subsidies, according to an analysis by the Center for International Environmental Law.

“This is billions upon billions of dollars in additional fossil fuel industry subsidies in addition to the $15 billion that we already hand out to this industry to support and fund this industry,” said Jim Walsh, Food and Water Watch’s senior policy analyst. Scientists say that to meet the goals of the international Paris climate accord, the U.S would need to reach net-zero emissions by 2050 — and be well on the way there by 2030. With subsidies that keep fossil fuel industries going, Walsh said, “We will never be able to meet the Paris agreement if we fund these kind of programs.”

“This deal envisions a world where we will use fossil fuels into perpetuity.”

Just as concerning is the new economy the subsidies could entrench, said Walsh, through the creation of new fossil fuel infrastructure. “This would support the development of four petrochemical hubs that would create profit incentives for greenhouse gas emission production and would be focused on finding new ways of integrating fossil fuels into our economy for transportation, energy, petrochemical development, and plastics.”

In short, he added, “This deal envisions a world where we will use fossil fuels into perpetuity.”

The subsidies would go toward technologies sold as dream fixes for ending the nightmare of the climate crisis without the colossal political hurdle of dislodging the fossil fuel industry from the U.S. economy. Such technologies include carbon capture and decarbonized hydrogen fuel. Both purported solutions in practice help fossil fuel companies mask the continued release of climate-warming gases. Neither of the technologies are currently commercially viable at a large scale, so the energy industry requires government help to carry out what critics see as a public relations scheme.

The bill includes billions of dollars for carbon capture, utilization, and storage; hydrogen fuel made from natural gas; and “low emissions buses” that could run on fuels including hydrogen and natural gas. It also encourages subsidies that go unquantified in the legislation, for example urging states to waive property taxes for pipelines to transport captured carbon.

The devil is in the details. The vast majority of clean-sounding hydrogen is made from natural gas and produces the greenhouse gas carbon dioxide as a waste product. The process itself requires energy, typically supplied by burning more natural gas, which also produces greenhouse gases. Meanwhile, carbon capture and storage are promoted primarily as a means to clean up continued emissions from fossil fuel processing facilities. Carbon capture would do nothing to resolve the array of severe environmental problems caused upstream by drilling, fracking, and mining — let alone the downstream burning of the fuels for energy.

The survival of the fossil fuel industry depends on its ability to convince the public that corporations are taking steps to address the climate crisis. Hydrogen and carbon capture, utilization, and storage have been two of the industry’s key strategies for achieving that goal. Exxon Mobil, Royal Dutch Shell, and Chevron, just to name a few, have touted their investments in hydrogen and carbon capture.

While long-shot, industry-supported “climate” projects depend on government subsidies, so does the rapid scale-up of renewable energy sources already proven to meaningfully slow down the spiraling climate crisis. Put simply, wind and solar work as climate fixes right now, while carbon capture and “decarbonized” hydrogen do not.

Yet the Democrats and Republicans pushing the infrastructure compromise are choosing to give the fossil fuel industry a lifeline instead of providing funding for proven renewable energy technology. Even bill provisions that facilitate renewable energy development contain language that could allow funds to go instead to fossil fuel industry “solutions.”

“By far, the best thing to do with the subsidy money for this is to purchase wind, solar, and storage to eliminate fossil fuels.”

“Any legislation funding carbon capture and storage or use or direct air capture is legalizing the funding of scam technologies that merely increase air pollution death and illness, mining and its damage, and fossil-fuel infrastructure, and they have no provable carbon benefit,” said Mark Jacobson, a professor of civil and environmental engineering at Stanford University. “By far, the best thing to do with the subsidy money for this is to purchase wind, solar, and storage to eliminate fossil fuels.”

Senate Majority Leader Chuck Schumer, D-N.Y., hopes to finalize the latest $550 billion bipartisan iteration of the infrastructure bill by the end of the week. The legislation will also have to make it through the House and will ultimately be complimented by hundreds of billions in additional provisions to be hammered out though a separate process called reconciliation, which requires no Republican support.

President Joe Biden kicked off the process with his own blueprint, the $2.5 trillion American Jobs Plan. Republicans, however, didn’t come up with the carbon capture and hydrogen spending: Many of the industry-friendly proposals were part of Biden’s plan from the start. “It’s truly bipartisan, which makes me cringe,” said Walsh.

The bill is moving fast, and the billions in funding are set to become law at a time when policymakers and the public still lack a firm grasp on how the technologies work.

Hydrogen has become the latest darling of the fossil fuel industry. So-called clean or “blue” hydrogen would use carbon capture and storage to neutralize the greenhouse gas emissions associated with the process. Another type of the fuel, called “green” hydrogen, uses electricity drawn from renewables.

Neither “blue” nor “green” means of hydrogen production, however, are widely used. For instance, only two facilities in the world have tried to commercially produce decarbonized “blue” hydrogen. As a result, 96 percent of hydrogen fuel globally comes from carbon-intensive means of production, according to a 2019 report. Research out of Stanford and Cornell Universities indicates hydrogen produces more climate-warming gases than simply using natural gas directly.

The infrastructure bill calls for a national strategy to put “clean hydrogen” into action, including four regional hydrogen hubs. The provision explicitly ties one hub to fossil fuels and calls for two others to be near natural gas resources.

Likewise, the carbon capture measure in the bill ties government investment to areas “with high levels of coal, oil, or natural gas resources.”

Existing carbon capture projects have repeatedly run into problems, including a heavily subsidized Chevron facility dubbed the largest carbon capture project in the world, which was attached to a liquid natural gas export facility in Australia and recently deemed a technological failure. Exacerbating the problem is that there is no real market for captured carbon — except to use captured gases to produce even more oil from old wells. While the legislation puts money toward creating new uses for the trapped gases, large-scale markets are a far-off prospect.

While the legislation puts money toward creating new uses for the trapped gases, large-scale markets are a far-off prospect.

Some proponents argue that carbon capture and hydrogen fuels could ultimately be beneficial for the climate if used for narrow purposes, like capturing carbon from steel production. But there is nothing in the bill preventing the fossil fuel industry from using the purportedly climate-friendly technologies to shore up its image while continuing to release emissions — a tactic known as “greenwashing.”

Environmental justice groups are clear about where they stand. Biden’s Environmental Justice Advisory Council issued a report in May that included carbon capture and storage among a list of technologies that will not benefit communities. Separately, a group of hundreds of organizations, ranging from Ben & Jerry’s to 350.org, sent a letter to Democratic leaders on July 19 urging them to resist energy strategies reliant on carbon capture, utilization, and storage.

The letter reads, “Investing in carbon capture delays the needed transition away from fossil fuels and other combustible energy sources, and poses significant new environmental, health, and safety risks, particularly to Black, Brown, and Indigenous communities already overburdened by industrial pollution, dispossession, and the impacts of climate change.”