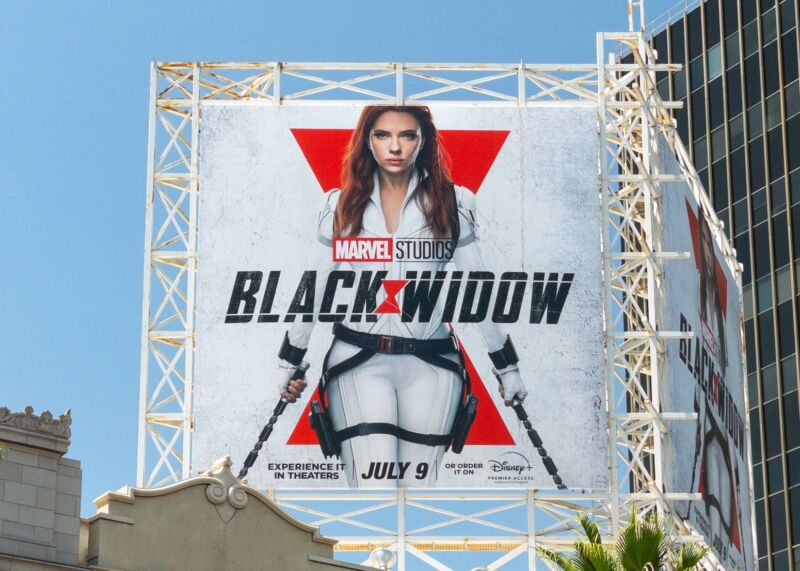 Scarlett Johansson sued the Walt Disney Company yesterday, alleging that it breached her contract by releasing Black Widow on Disney+ the same day it was released in theaters.

The simultaneous release allowed Disney to pay Johansson less money because she and the Disney-owned Marvel agreed that her compensation for Black Widow “would be based largely on ‘box office’ receipts generated by the picture,” according to Johansson’s complaint filed in Los Angeles County’s Superior Court for the State of California. This was a contract violation because Johansson secured a promise from Marvel that the movie would initially be released in theaters only, the lawsuit said:

To maximize these receipts, and thereby protect her financial interests, Ms. Johansson extracted a promise from Marvel that the release of the picture would be a “theatrical release.” As Ms. Johansson, Disney, Marvel, and most everyone else in Hollywood knows, a “theatrical release” is a release that is exclusive to movie theaters. Disney was well aware of this promise, but nonetheless directed Marvel to violate its pledge and instead release the picture on the Disney+ streaming service the very same day it was released in movie theaters.

The reasons for this were twofold. First, Disney wanted to lure the picture’s audience away from movie theaters and towards its owned streaming service, where it could keep the revenues for itself while simultaneously growing the Disney+ subscriber base, a proven way to boost Disney’s stock price. Second, Disney wanted to substantially devalue Ms. Johansson’s agreement and thereby enrich itself. In the months leading up to this lawsuit, Ms. Johansson gave Disney and Marvel every opportunity to right their wrong and make good on Marvel’s promise. Unlike numerous other movie studios, however—including Warner Brothers who, on information and belief, settled with its talent on films such as Wonder Woman after it released those films “day-and-date” to its streaming service HBO Max last year—Disney and Marvel largely ignored Ms. Johansson, essentially forcing her to file this action.

The lawsuit accuses Disney of intentional interference with contractual relations and inducing breach of contract, alleging that the contract breach “was the direct result of Disney directing Marvel to ignore Ms. Johansson’s agreement and/or overruling Marvel’s wishes to comply with it.” Johansson demanded a jury trial and asked the court for monetary and punitive damages in amounts to be proven at trial.

Previous post Evolutionary chaos as butterflies, wasps, and viruses have a three-way war